Easter this year was not real fun, and I don't mean the previous years were particularly good, but  I just can't remember how they were. I guess that's a good sign!
Tension has been rising really fast lately at home, and the stress level was almost out of control on  Thursday afternoon.
On Friday, since it was a Holiday, we all stayed at home, including Mr. "I'm bored". Whenever he's home, he needs to create problems to anyone in order to distract himself, and since we all know that, we usually do our best to keep him busy.
On that same day, my winter guest, his mother, left to go home, to her village. For Mr."I'm bored" that was the perfect opportunity to 'let go" all of his anger and frustrations that he had tried very hard to keep quiet for all those months while she was around.
Plans were that we would join her on Saturday morning in the village. Those visits to the village have always been torture for me who loves silence and peace. When we gather there for any occasion, we are 23 persons to live and sleep in two rooms. I was there, both hands swollen, in pain, walking like a duck, and enjoying a perfect migraine.

My only remedy for difficult situations is to look at the "funny" part of  it, which I did. There were several situations this week-end where I had difficulty stopping myself laughing aloud, for example: 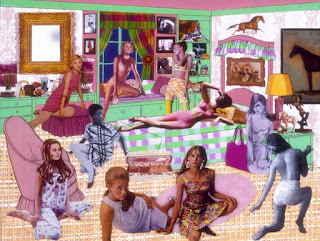 I pray you all had a wonderful Easter :)