That is war! They say it's over, but I know it's not. War is not limited to one country, to one population. War is not only destroying buildings and places, it is killing humanity, and destroying souls.

I have been thinking of that day with a lot of anxiety since yesterday ... trying to push the memory away or turn it into a positive one. It's hard, and I know all of you have memories that are hard to ignore.
Before trying to write about it, I tried to find information on Google about that specific day, and I gathered the three statements I mentioned above.

That's it? Bombs, missiles that killed 100 innocent civilians? They talk about it as if it was an insignificant incident.

Does anyone know or think about what that day represented for us who lived it? I am not able to talk about my emotions now, so I will just state the facts as they occurred.
It was a calm day in early April. I was at school as usual. Since Teta (my grandmother) had died, I used to walk almost 3 km to give my grand father his lunch. My youngest sister left school that day with her friend to spend the afternoon, and Mama and my other sister were to visit my father at his new office for a surprise. On their way, Mama asked my sister to wait for her in the entrance of a building while she wanted to buy some food from the grocery shop. Everyone was in a different place when it started.
I was still walking, on my way. Suddenly, it all began. Bombs and explosions resonated all around me, windows were broken, people were panicking, cars driving crazily, trying to escape and I was walking. Strangers were calling me to come and hide, asking what would a 13 years old girl do on the streets alone, but I just accelerated focusing on Jeddo, my grandfather, and him waiting for me to cook his lunch. 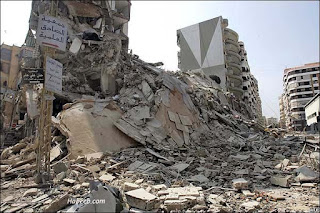 When I arrived, I found Jeddo's neighbors waiting for me and scared as Mami, my mama, had called to check if I had arrived safely. Jeddo was living on the 5th floor, the top floor of the building ... which is always the most dangerous. I argued with them all because I wanted to go upstairs to Jeddo. They tried hard, but no one managed to stop me. Sounds became closer and louder. The cement strong building was shaking. Electricity went off, telephone lines went off, people were now all yelling at me and at Jeddo to force me to leave and go down with them to the shelter in the basement.

Rockets reached our street, our building. All windows in the apartment were broken. I was worried about my parents, my sisters, my aunt. I didn't know where they were. All I wanted is for them to be safe. I wasn't afraid of dying. Nor was I frightened of the sounds as much as I was scared of any of them being hurt. I know I prayed. I remember asking God to protect them for me, to bring them back home safe, and I begged him to choose me if in His plans, one of us was to get hurt. I would gladly give my own life in exchange for one of theirs. 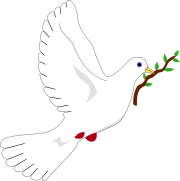 I'm not able to say more about it now. We were all reunited almost 48 hours later, homeless as our own apartment had been completely destroyed ... we had nothing, but we were alive. We were all safe.

That is war for whoever didn't experience it, not the breaking news we see briefly on TV. That is real, and it is still happening. Isn't it ENOUGH? Isn't it easier to love each other and make PEACE?